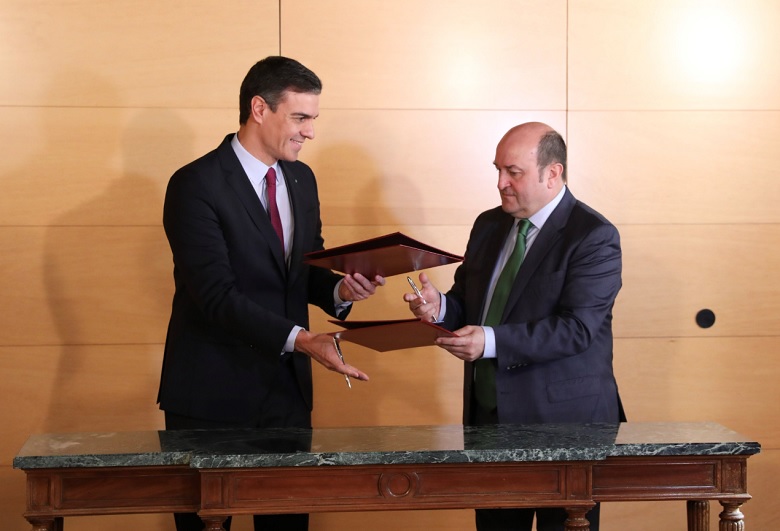 Pedro Sánchez and Andoni Ortuzar signed on Monday the agreement reached between the PSOE and the PNV, whereby the Basque formation will support the investiture of the socialist candidate. Among the twelve agreed measures, it is worth mentioning, for example, the one that says that the Government will previously agree with the Basque nationalists on the fiscal measures that it wants to implement.

The PSOE has also committed itself to the transfer to the Basque Country of some pending powers, to fulfill the commitments adopted by the previous Executive of the PP with the PNV, to the Basque nationalists to have a voice in determining the Euskadi deficit target or to support the presence of the Basque Country in the European Union, as well as in the international sports and cultural field.

These are all points of the agreement that will make the PNV vote favorably on the investiture of Sánchez:

1. Maintain a fluid and constant communication with EAJ-PNV, making sufficiently known in advance the projects and initiatives that the Government wishes to promote, committing, in addition, to reaching a satisfactory agreement in case of discrepancy.

2. Maintain a fluid communication with the Basque Government in order to avoid the judicialization of discrepancies, which must be replaced by the political agreement.

3. Proceed in 2020 to negotiate and transfer the pending statutory powers to the CAV. Likewise, it will proceed within six months to transfer traffic competences to the Autonomous Community of Navarra, with the same content and extension as those made at the time to the CAV.

4. Promote, through dialogue between parties and institutions, the necessary reforms to adapt the structure of the State to the recognition of territorial identities, agreeing, where appropriate, the necessary legal modifications, in order to find a solution to both the contentious Catalonia as in the negotiation and agreement of the new Statute of the CAV, taking into account the national feelings of belonging.

5. Bet urgently, firmly and decisively on the infrastructure corresponding to the State in the CAV and, especially, regarding the TAV, including the work schedule and the complementary commitments already closed with the State Government.

6. Comply with the pending aspects of the agreements signed by EAJ-PNV with the PP Government in different areas, a commitment already acquired by the candidate in the process of the 2018 motion of censure.

8. Promote the industry decisively and compensate its adaptation to the energy transformation by maintaining economic activity and employment, enabling a realistic transition and protecting the jobs of the sectors affected by these changes.

9. To previously agree with EAJ-PNV the fiscal measures that the Government wishes to propose to the Courts, as well as to channel the discrepancies that may occur in the relations in the fiscal or financial sphere established by the Economic Concert.

10. The process of determining the deficit objectives corresponding to the CAV and the CFN, as well as the criteria for reinvestment of the surplus of local entities, provincial councils and governments in their respective territories will be carried out with the participation and in the framework of the Joint Concert and Agreement Commissions.

11. Open channels to promote the international representation of Euskadi in the sport and cultural field.

12. Modify, with the agreement of EAJ-PNV, the content of those known as digital decrees so that discrepancies about them manifested in the parliamentary sphere are resolved (Royal Decree-Law 14/2019, of October 31 and Royal Decretoley 12/2018, of September 7).

The climber of the year TIME ONLINE