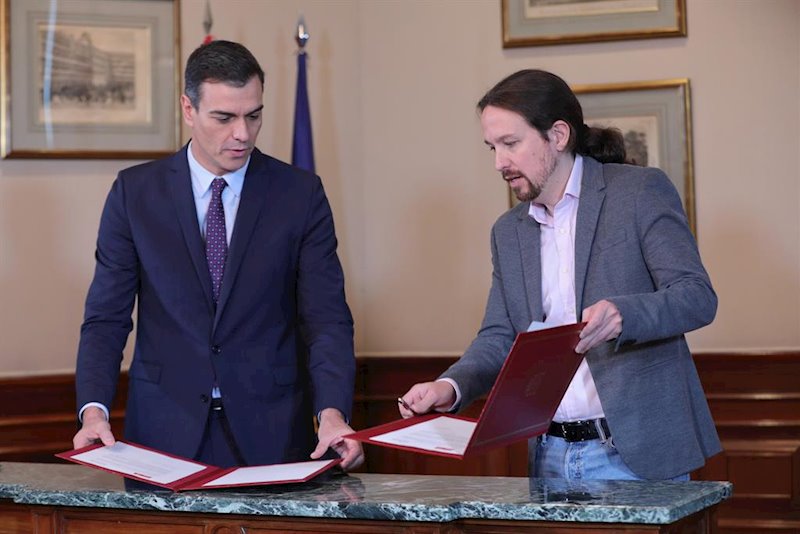 Increase taxes on higher incomes and large companies, repeal labor reform and raise the minimum wage. These are some of the measures included in the Government program that PSOE and United We Can will present in the afternoon of this Monday in the Congress of Deputies waiting for a date to be set for the investiture.

Under the name 'Progressive Coalition. A new agreement for Spain ', the acting President of the Government, Pedro Sanchez, and the leader of the purple formation, Pablo Iglesias, have developed a program that details that the IRPF will raise two points for income of more than 130,000 euros and four points for more than 300,000 euros. The state rate on capital income will be increased by four percentage points for income above 140,000 euros.

For him Corporation tax a minimum rate of 15% will be set, which stands at 18% for banks and energy companies.

For the Corporation Tax a minimum rate of 15% will be set, which stands at 18% for banks

In the workplace, the 2012 reform is expected to be repealed, which is another step in the modification of certain aspects that were expected. Thus, the document promises recover "labor rights taken away" for the reform carried out by Mariano Rajoy.

It also includes one of the measures agreed between both parties, the increase in the minimum interprofessional salary (SMI). In this way, it will be located in the 1,200 euros at the end of the legislature.

With regard to pensions, the sustainability factor and the revaluation index are eliminated, with the aim of ensuring the sustainability of the system "in the medium and long term". Of course, always within the framework of the Toledo Pact. In this sense, the proposal to create a minimum vital income as a Social Security benefit.

As for housing, the text speaks of regulate rental prices, through promoting the "regulatory measures necessary to put a ceiling on abusive increases in rental prices in certain areas of stressed market."

The climber of the year TIME ONLINE