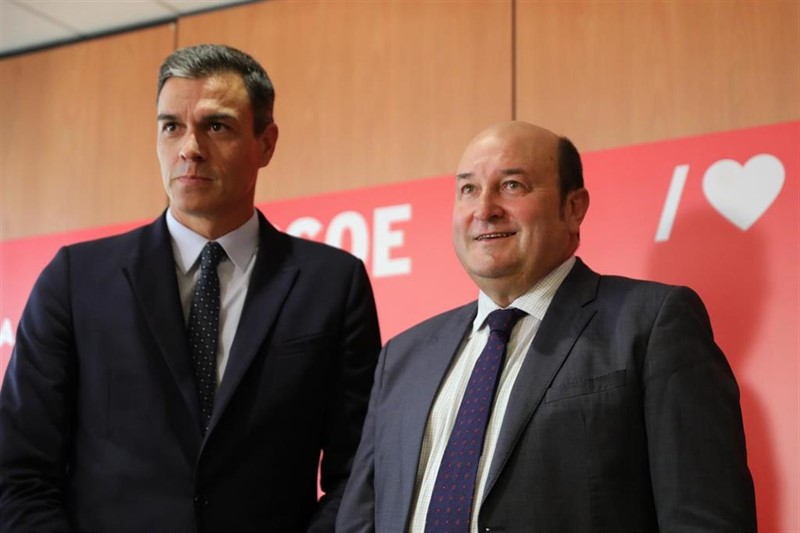 The PNV has reached an agreement with the PSOE so that the six jeltzales deputies in the lower house support the investiture of Pedro Sanchez as president of the Government.

The Basque Minister of Economy and Finance, Pedro Azpiazu, said in statements to Radio Euskadi that the agreement between PNV and PSOE for the investiture represents a "very good news", which helps to "put on track the situation of indefinition and lack of government that takes a long time" in the State and that "if it arrives on January 5 is not a bad gift from Reyes."

He recalled that the relationship between PNV and the Socialist Party has been "well anchored for a long time." "We are governing in Euskadi, in the Basque Government, in the councils … there is a broad agreement to give stability to the institutions and I believe that giving stability in Madrid also what it does is strengthen a deal that comes a long time ago", has added.

Meanwhile, another of the necessary support for Sánchez, ERCHe said on Sunday that there could be an agreement with the Socialists provided that the State Advocacy report on the ruling of the Court of Justice of the European Union (CJEU) on the immunity of the president of ERC, Oriol Junqueras, be favorable. However, the Catalan party has ruled out that it occurs before the end of the year, since it rules out calling its National Consell in 2019, a "essential" step to close a governance agreement with the PSOE.

This decision adjusts the times of an investiture debate whose dates were foreseen, in the last chapter, for January 2,3 and 5, however, they don't make it impossible, but it seems difficult.

WE CAN PREPARE FOR THE GOVERNMENT

The leader of United We Can, Pablo Iglesias and the rest of the leaders have maintained a calculated silence for weeks to guarantee the good development of the negotiations they are carrying out with the PSOE with absolute discretion to form a Government.

The training has taken its role as a Government partner very seriously, in which, if the forecasts are met, they will be present with a Vice-Presidency of a social nature in charge of Iglesias, of which four ministries will depend that will be shared with its coalition partners of United Podemos – the Catalans of En Comú, IU and Galicia in Common.

"Not according to the cardinal direction, but as required" TIME ONLINE