Repsol loses 94 million in the quarter and increases its red numbers to 2,578 million 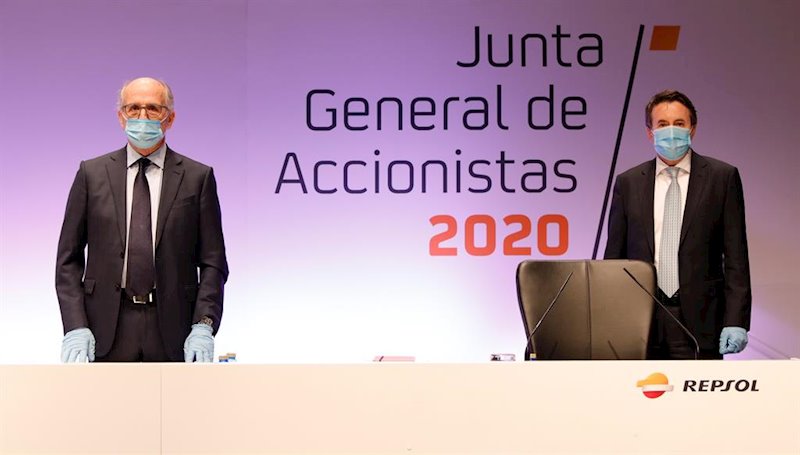 Repsol has presented a net loss of 94 million euros in the third quarter, increasing its losses from January to September to 2,578 million. The oil company attributes this result "mainly to provisions for impairment and compensation"His shares fell 1.5%, to 5.19 euros, after scoring the lowest of the last 18 years in the previous day.

We remember that Repsol lost 2.484 million euros in the first half of the year after signing up for a 2,673 million impact by the pandemic in the valuation of their inventories, by the revision in their hypothesis of future prices of crude oil and gas; and by adjusting the value of its 'Upstream' assets (Exploration and Production).

The unprecedented situation caused by Covid, which has led to a historic collapse in oil and gas prices, has had a negative impact of 1,048 million euros on the company's inventories. In addition, Repsol adjusted its price assumptions, which affected the book value of its 'Upstream' assets, reflected in an impact of 1,585 million euros.

He adjusted net income for the third quarter amounted to 51 million euros, 167 million less than in the same quarter of 2019, "mainly due to some lower oil and gas realization prices, as well as lower production, "explains the company, which has tried to compensate for these factors with" lower costs, lower amortization and lower taxes, due to lower operating results. "

"Weak results that will have a negative impact. However, they are expected since the market context is especially complicated. Despite the fact that the environment is particularly adverse, we maintain our recommendation at Neutral and Target Price at 6.0 euros per share, since Repsol is one of the multi-energy companies with the best prospects, "they state from Bankinter." It has a healthy balance, trades at reduced multiples, they have one attractive dividend yield and its presence in the renewable area"these analysts add.

The main factors that explain the variations in the result of the division of Exploration and Production compared to the same quarter of the previous year are the following:

one. The lower prices of realization have had a negative effect on the operating result of 356 million euros.

two. The lower volumes have negatively impacted operating income in 248 million, mainly due to the interruption of operations in Libya since January 19, the lower gas demand caused by Covid 19, the temporary interruption of production as a result of lower prices and maintenance activities.

3. The lower production costs and overhead costs have had a positive effect on the operating result of 42 million, mainly derived from lower activity and lower costs due to higher efficiencies. The Amortization They were 177 million lower, mainly due to lower production and lower amortization, as a consequence of the provisions for impairment recorded in 2019 and 2020.

Four. The lower royalties have had a positive impact on operating income in 58 million, due to lower production and lower prices. The profit tax They have had a positive impact on the adjusted net income of 188 million, due to a lower operating result. The results of investee and minority companies, exploration costs and the depreciation of the dollar against the euro explain the remaining differences.

Repsol highlights its "positive operating cash generation during the year, of 2,122 million euros, while reducing its net debt by 882 million euros, reaching 3,338 million".

Everything remains the same at Telefónica: reversing a downtrend is an impossible mission

Tests to detect Covid-19: Where can I get a PCR test?